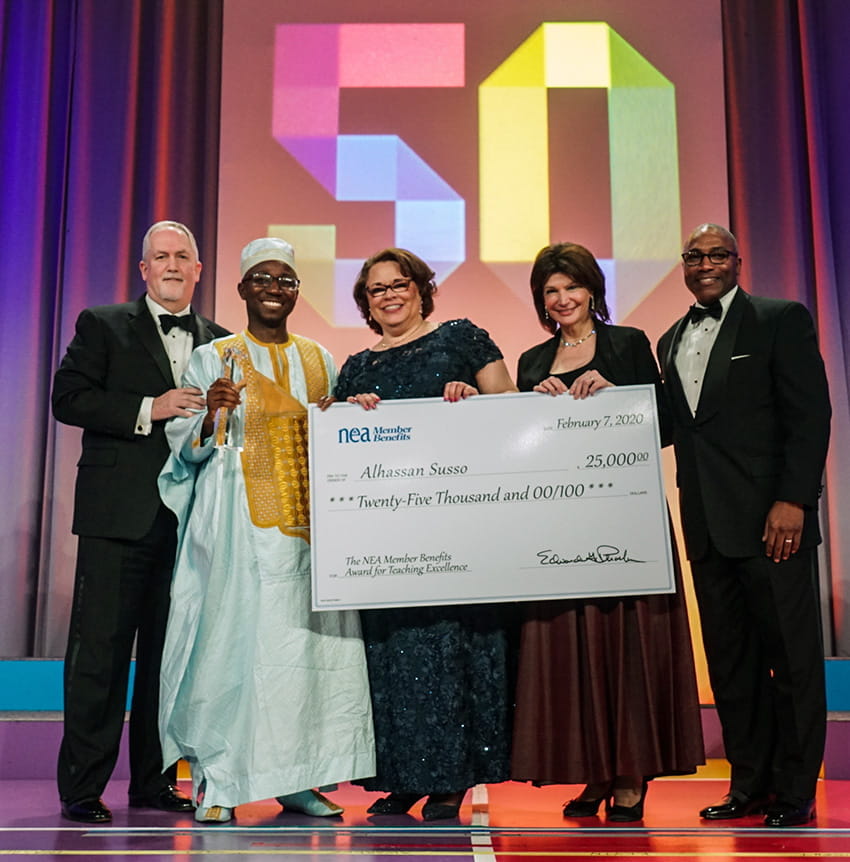 WASHINGTON, DC (February 10, 2020) –  On Friday, February 7, at the NEA Foundation’s Salute to Excellence in Education Gala in Washington, D.C., Alhassan Susso, a 12th grade social studies educator at International Community High School in the Bronx, NY, received one of public education’s most prestigious honors: The NEA Member Benefits Award for Teaching Excellence and $25,000.

“Alhassan’s powerful work to educate and inspire immigrant students and the diverse community he serves has been transformational,” said Sara A. Sneed, president and CEO of the NEA Foundation. “By sharing his own experience as an immigrant and his passion for motivating young people, he has helped his students to see the potential for excellence within themselves. He is living proof that every child in this country deserves a quality education and an opportunity to thrive.”

An author, speaker, and educator, Susso immigrated to New York from The Gambia at age 16, confronted the challenges of homelessness and vision impairment, and was inspired by one of his public school teachers to pursue his vocation in the classroom. He works with a diverse population of students, some of who are dealing with challenges adapting to the school setting, financial insecurity, and other hurdles to realizing their potential. In his school, Susso has helped foster a community of learners, providing students with the social and emotional skills to succeed.

The 2019 New York State Teacher of the Year, Susso has received numerous honors for his work. He was named as one of the Varkey Foundation’s Global Teacher Prize Top 50 Finalists in 2017. He is the recipient of the Daylight Africa Award and the United Federation of Teachers’ Audrey Chasen Award. He was recognized by the Dutchess County Legislature, The Bronx Borough President, the New York City Mayor’s Office and the New York State Comptroller as the Outstanding Citizen of the Year in 2019.

Susso was nominated for the NEA Member Benefits Award by the New York State United Teachers and is one of 45 public school educators selected by their state education associations who were honored on stage by the NEA Foundation and more than 800 guests.

He was also one of five finalists for the top award. Each finalist received special recognition at the gala, the Horace Mann Award for Teaching Excellence, and $10,000.

The other four finalists included:

The NEA Foundation’s gala is an annual celebration of the men and women who work in America’s public schools. The NEA Foundation presented awards to exceptional educators and dedicated supporters of public education from across the country. Susso’s award was the evening’s finale.

During the gala, the NEA Foundation also honored Dr. Linda Darling-Hammond with the First National Bank of Omaha Award for Outstanding Service to Public Education for her accomplishments as a lifelong educator and influential education policy writer and researcher. Memphis educator Melissa Collins received the Harriet Sanford Award for Global Learning for her contributions to furthering global education in her community and beyond.

The event was hosted by John W. Marshall, motivational speaker and son of Thurgood Marshall, our nation’s first African-American U.S. Supreme Court Justice. It also featured performances by the Counterpoints.