Intergalactic battles, zero-g rolls, one-on-ones with your superheroes. We’ve got the inside track on your new favorite theme park experiences. 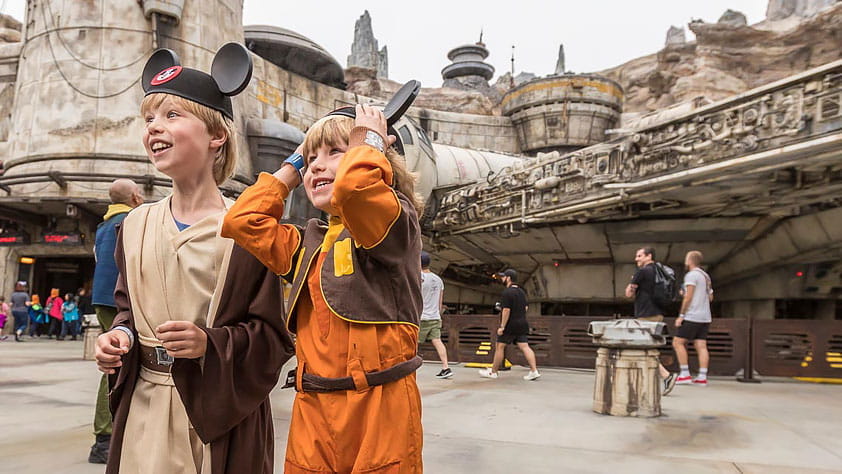 Whether you're just a casual fan of amusement rides or a true theme park aficionado, 2019 has brought many new attractions to a multitude of destinations across America. From Disney’s much-awaited Star Wars: Galaxy's Edge to a new Harry Potter adventure at Universal Orlando, to a new ride at Busch Gardens, we introduce six of the best to you. Take your pick or go and experience them all!

Don’t miss its two signature attractions—Millennium Falcon: Smugglers Run, where you get to choose to be a pilot, gunner or engineer on a smuggling mission, and Star Wars: Rise of the Resistance (opens Dec. 5 at Walt Disney World and Jan. 17, 2020, in Disneyland), where you experience being caught in the middle of a battle between the First Order and the Resistance.

See rare creatures from all over the galaxy at Creature Stall, view Toydarian-crafted toys and games or buy the latest galactic apparel, trinkets and accessories. At Dok-Ondar’s Den of Antiquities, you’ll find ancient artifacts and other rare and mysterious items, plus the Ithorian Dok-Ondar himself checking the inventory and barking orders at assistants. For DIY-lovers, head to Droid Depot or Savi’s Workshop to customize droids and lightsabers, respectively. The experiences start at around $100 per person for a droid and $200 for a lightsaber.

When hunger strikes, five eateries in various locations, such as a canteen and a spacecraft hangar, will satisfy with offerings ranging from flavored popcorn to salads to mac 'n' cheese, plus iconic blue and green nondairy "milk" and exotic nonalcoholic drinks, such as the Sour Sarlacc and Tatooine Sunset.

The world’s first “story coaster,” Hagrid’s Magical Creatures Motorbike Adventure continues the tale of the Boy Who Lived at Universal Orlando’s Hogsmeade section of The Wizarding World of Harry Potter. Featuring a real forest of more than 1,200 trees, Florida’s longest roller coaster (it’s more than 5,000 feet long) takes you on a magical journey through the Forbidden Forest as part of your Care of Magical Creatures class.

See dragon eggs, a nursery for blast-ended skrewts, the lovable dog Fang and more. It all starts at the ruins behind Hagrid’s hut. Prepare to take a firm hold of your heart as the ride catapults you 65 feet into the air at more than a 70-degree angle. In one quick movement, you're almost instantly dropped back downward again. The attraction launches you seven times (the most launches of any roller coaster in the world) and free falls on a nearly 17-foot vertical drop.

A new world created entirely from Lego bricks has landed at Legoland Florida, replacing The World of Chima. The largest expansion in the theme park’s history so far, The Lego Movie World features three new rides, all based on "The Lego Movie" and its sequel, “The Lego Movie 2: The Second Part.”

The Lego Movie Masters of Flight is a flying theater—the first ever in Legoland. You’ll feel like you're flying aboard Emmet’s Triple Decker Couch and watch scenes inspired by the film on its full-dome virtual screen.

From the top of Cloud Cuckoo Land, Unikitty’s Disco Drop takes you for an exhilarating ride. Unikitty’s face is shown at the top of the tower and the expression changes as riders fly up and down.

And the only water ride at Legoland Florida, Battle of Bricksburg, has you fighting Duplo aliens who are out to steal Lego bricks. Aim and spray water to defeat the invading aliens. Don’t worry. You have backup—water cannons outside of the ride help you save the day.

Perhaps one of the most famous streets in the world, Sesame Street—and the many familiar faces that live here—comes alive as a new attraction at SeaWorld Orlando. This recreated neighborhood is all about fun, learning and interactive play. Walk down Sesame Street and play with Big Bird, Cookie Monster, Elmo and the rest of the gang.

There’s a ton to do and enjoy here. Seven new attractions feature Abby’s Flower Tower, Cookie Drop! and Elmo’s Choo Choo Train, and about a dozen interactive play options include storytime with Big Bird, knocking on Oscar’s Trash Can, ringing Bert and Ernie’s doorbell and creating your very own monster. Meet-and-greet and photo ops cost $30 for a group of up to five people. Don’t miss the first-ever parade at the theme park, the Sesame Street Party Parade, which happens thrice daily for three times the fun—11:30 a.m., 2:30 p.m. and 4:30 p.m. Pay $10 to reserve a great spot in the middle of the parade route.

Feel what’s it like to ride a tiger at Busch Gardens Tampa through its latest addition, the Tigris. This new ride, Florida’s tallest launch coaster that runs over 1,800 feet at more than 60mph, has no shortage of thrilling twists and drops, including a 150-foot skyward surge. Riders must be at least 54 inches tall. If you want to skip to the front of the line, buy the Quick Queue Unlimited ticket add-on. It lets you skip the line once at Tigris and an unlimited number of times at other attractions like Falcon's Fury, Cheetah Hunt, Cobra's Curse, Congo River Rapids and more. The per person price varies depending on the season and day of the week.

Learn about tigers and the efforts of the Busch Gardens Conservation Fund’s while you wait for your turn to ride. Afterward, you can choose to purchase items from the Tigris gift shop, where 5% of the sales price goes to the fund.

While a theme park trip is exciting, it can quickly get tiring—especially when you’re bringing kids along. Keep the energy level up by combining character meet-and-greets with mealtime.

At Universal Orlando, Marvel character meals are here to save the day. Located at Universal’s Islands of Adventure, Cafe 4—a Fantastic Four-themed Italian eatery serving kid-friendly fare such as spaghetti and meatballs, pizza and more—transforms into the venue for the Marvel Character Dinner Thursdays to Sundays at 5 p.m.

Marvel fans of all ages will be all smiles when their favorite superheroes, such as Captain America, Spiderman, Wolverine, Storm and Rogue, make an appearance to sign autographs, pose for pictures or talk with you over a dinner of roasted rosemary lemon chicken, shrimp scampi, specialty pizzas and a variety of pasta and salads.

While not new, if you haven’t tried the Marvel character dining experience yet, do it on your next visit. The experience costs $24.99 for ages 3–9  and $49.99 for anyone 10+. Universal offers other character dining options, including a "Despicable Me" breakfast, a Halloween Scareactor Dining Experience and a Christmas breakfast with the Grinch.

Save on your next theme park adventure