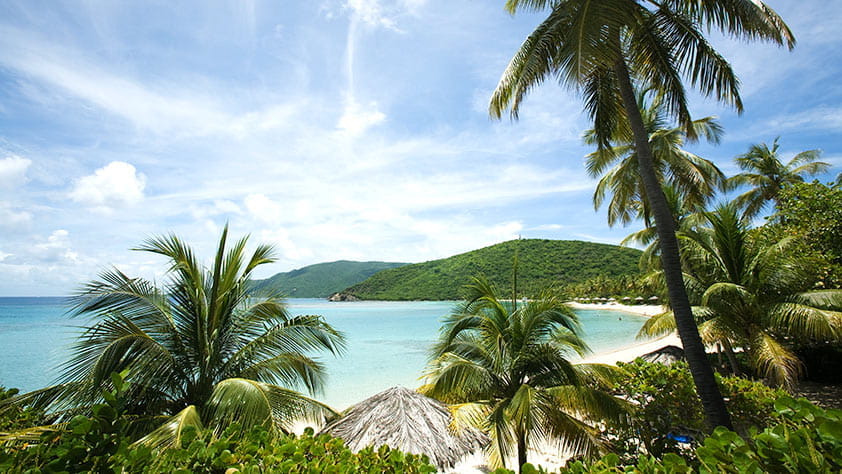 Palm-fringed white sand beaches, turquoise waters and steady-but-gentle trade winds add up to perfect conditions for a vacation in the British Virgin Islands (BVI). Throw in hiking through lush mountain jungles, plentiful snorkeling and diving, a dash of salty pirate history and a beach bar or two, and you’ll truly feel you’ve gotten away from it all.

Tortola: The largest of the 50+ British Virgin Islands

More than 80% of the BVI’s 29,000 residents live on Tortola. About 12 miles long and 4 miles across and roughly shaped like the turtledove it’s named for, Tortola is home to Road Town, the small nation’s capital and center of commerce. This is the main port of entry for most visitors to the BVI.

Many of the shops on Road Town’s narrow, winding Main Street are in historic wooden buildings, colorfully painted with gingerbread trim. Look for resort wear, handcrafted jewelry, baked goods, pottery and other work by Caribbean artists. Duck into the Sunny Caribbee Spice Shop & Art Gallery to take home a taste of the islands: hot sauces, chutneys, spices, teas and herbs.

BVI’s friendly residents never seem to be in a rush. Ask questions, and they’re happy to share stories or advice about the best things to see and do here. On Tortola, that might include nightlife and restaurants ranging from casual to upscale, or favorite beaches such as Cane Garden Bay, where you can swim, dine, sip cocktails or watch the sunset with sand between your toes.

The islands’ first conservationist was Joseph Reynold O’Neal, a leader in the formation of the BVI National Parks Trust in 1961. Almost 3 acres of indigenous and exotic plants now comprise Road Town’s J.R. O’Neal Botanic Gardens, where shaded paths, flower-draped pergolas, palm trees and a fountain make this a relaxing oasis of calm. Don’t miss the orchids and resident birds or the turtles that swim in the pond.

Tortola is both tropical and mountainous, and getting around via land means taking one of the two main roads. One follows the coast, while the other is the aptly named Ridge Road. The island’s spine tops out at 1,716 feet in Sage Mountain National Park, offering spectacular views of all the other islands, as well as their nearby U.S. cousins.

East of Tortola—about 10 miles as the gull flies or 30 minutes by ferry from Road Town—is the third-largest of the islands, Virgin Gorda. With fewer than 4,000 residents, Virgin Gorda is quieter than Tortola. But for many BVI visitors, it is the highlight of their time here, especially because of The Baths National Park. Located at the island’s southwestern tip, The Baths’ massive granite boulders—some as big as houses—create secret rock pools and grottoes ideal for swimming and exploring.

This distinctive geology is a result of molten rock that seeped into the existing volcanic rock layers and slowly cooled, creating a layer of granite that shrank and cracked. Over eons, water weathered the blocks to their famed shapes. Ladders and a rope handrail guide visitors along a path through the rocks to the beach at Devil’s Bay.

Other natural and manmade features on Virgin Gorda include remote, unspoiled beaches and Little Fort National Park, with its remains of a Spanish fortress, and 260-acre Gorda Peak National Park. Enjoy spectacular views and look for wildlife such as the tiny Virgin Gorda gecko when you hike to a lookout tower atop the peak—the island’s highest point at 1,370 feet.

Also designated a national park is The Copper Mine, an abandoned copper mine at the southeastern tip of the island. The Spanish mined here in the early 18th century, but this structure was built by Cornish miners, who operated it between 1838 and 1862.

Play pirate: Discover the riches of the BVI

Pirates ruled the Caribbean in the late 17th and early 18th centuries, and that rich history is reflected in place names such as Smuggler’s Cove and Deadman’s Bay. Many locals are happy to share tales about characters such as Black Sam Bellamy, who navigated these islands during that time. The stories vary depending on who’s telling them, but that’s part of the fun!

Norman Island, south of Tortola, is also known as Treasure Island, and is said to have inspired Robert Louis Stevenson’s classic 1883 novel of the same name. According to many sources, 55 chests of silver—stolen from the Spanish galleon the Nuestra Señora de Guadalupe—were buried here in 1750. That treasure was plundered long ago, but rumors persist that riches may still be buried on some of the BVI’s uninhabited islands.

Today, Norman Island’s treasures may be best experienced by snorkelers who venture into the caves that feature schools of colorful fish and walls covered by thousands of orange cup coral and red sponge.

Some 15 miles northeast of the rest of the BVI, Anegada is the only nonvolcanic island in the chain. Its name translates to “drowned land,” maybe because its highest point is just 28 feet above sea level. Sparsely populated, Anegada has beautiful beaches, but its coral reefs were not so welcoming to ships in the past. As a result, it’s now a scuba diver’s paradise with more than 300 sunken shipwrecks to explore.

The RMS Rhone was sunk by a hurricane, not pirates, in 1867, but it is the best-preserved wreck in the BVI and is also the only one designated a Marine National Park. Much of the 310-foot Royal Mail Steamer is still intact, although it is split into two main parts near Salt Island.