A little positive reinforcement can go a long way. Teachers share their proven tactics to rein in the ruckus and get students focused. 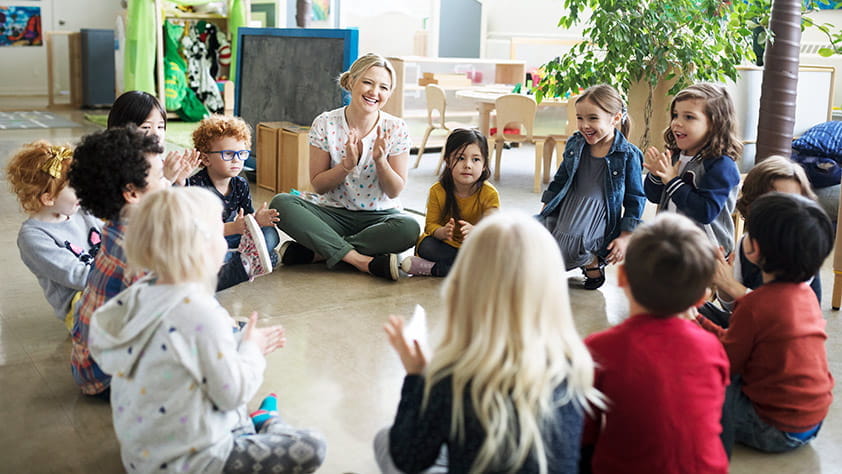 Karen Robertson spent 23 years as an elementary classroom teacher in Murrieta, California. She says many teachers underestimate the power of positive reinforcement, which can quickly curb talking in the classroom.

“I was the ticket lady,” says Robertson, who also spent 14 years as administrator for Murrieta Valley Unified School District in Southern California. “I’d take a roll of tickets everywhere. Even adults responded to it.”

For example, when the district was short a substitute teacher, Robertson filled in at a continuing education high school geared to 14- to 20-year-olds. “They were throwing stuff across the classroom, talking—it was total chaos,” she says. “I knew they were going to eat me alive if I didn’t do something.” So Robertson found the one student who was sitting quietly and handed that student a ticket. “Thank you for being ready to begin,” she recalls telling the student. “Write your name on the back of the ticket because you might win something.”

“All of the others immediately began to wonder what that student was handed and the room got 50 percent quieter,” Robertson says. “By the time I had given out two tickets, the entire room was quiet and with me.”

Robertson jokes that the only thing she had to give the students as rewards at the end of class were a few muffins she had taken from the administrative break room—which she cut into halves and distributed—but it worked. “People respond to that because it’s positive,” says Robertson, who has also given out stickers, erasers and even old toys the students didn’t want anymore that were donated and raffled off for tickets. “It gives the whole classroom a positive attitude because we all like rewards.”

Here are four other ways to help curb talking in your classroom.

1. Validate student concerns. Most students love to talk. It might be about their dog, their family or anything that they consider important. “If they have a concern, something that’s making them sad, I try to honor it even if it’s the silliest thing in the world,” says kindergarten teacher Jennifer Bond Stuart, who works in Dunnellon, Florida. “If it’s in the middle of teaching time, I validate their concern by saying ‘I really want to hear this, but I can hear about this later.’ It works with every child because they feel validated.”

She says it’s important to let students know that they are important and that you care about them, but there is an appropriate time and place to discuss things.

2. Use sign language; whisper. Debra Willems, a first grade teacher at Washington Elementary in Wheaton, Illinois, says her school has adopted a rule for the two-finger peace sign: Any teacher that holds it up needs the room to be quiet, especially during school assemblies or lunchrooms. In the classroom, Willems puts up her hand and counts down—5-4-3-2-1—to get the room to be quiet. “Or, I lower my voice and whisper,” she says. “All of sudden the students who are talking don’t have a clue what I’m saying and they don’t want to be left out if I start asking the other kids questions.”

3. Re-work plans for classroom discussions. Sometimes students, especially older students, are going to want to talk about current events that may be relevant to homework. After a student began asking questions about the immigration policy debate in Congress, Don Fulmer, a social studies teacher at Lake Park High School in Roselle, Illinois, held a classroom dialogue and debate for 15 minutes. “It wasn’t planned, but they walked on a high and so did I,” Fulmer says. “I had to reshuffle the rest of the lesson and the rest of the week, but when something like that is happening, you’ve got to take advantage of it.”

4. Get students involved; give respect. When Jane Nelsen, author of Positive Discipline: A Teacher's A-Z Guide, was working as an elementary school teacher in Elk Grove, California, she would always put problems on a class meeting agenda. “Get the kids in a circle, send a talking stick around and let them brainstorm and come up with a solution,” Nelsen says. “Students will come up with the same solutions teachers have lectured them about, but when they choose it, it works like magic.”