How to Effectively Use Humor in the Classroom

Done right, laughing along with your students can lower stress, reinforce lessons and boost student engagement. 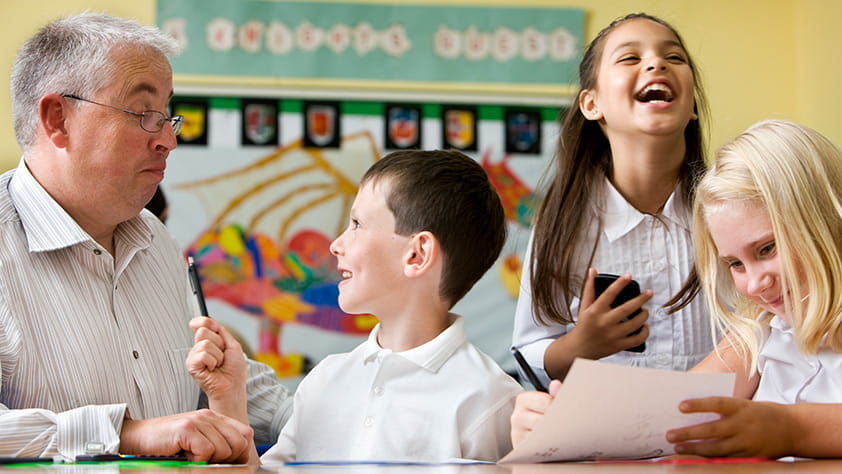 When Gary Rubinstein, a New York City high school math teacher who has dabbled in stand-up comedy, wanted to teach his students about symmetry, he showed them two pictures of movie star Angelina Jolie—one with just the left side of her face reflected back on itself, and one with just the right side reflected.

Rubinstein then showed two images of himself, each reflecting a different half of his face. The first photo depicted him as bloated, balding and slyly smiling, while in the second he appeared purse-lipped, mop-headed and thin.

“As you can see,” he told the class, “these pictures are pretty similar, so I guess I’m very good looking.”

His students erupted in laughter.

“The number one quality that high-school kids want in a teacher is a sense of humor,” Morrison says. “They remember those teachers, and they will become more engaged with those teachers.”

Short on material? Look inward. Kids love to laugh at their teachers.

In addition to mocking his looks, Rubinstein sometimes plays up the image of himself as an out-of-touch math nerd, pretending that he thinks “Hannah Montana” is currently topping the pop charts.

Michael Lovorn, a former K-12 teacher who now researches humor and teaching as an assistant professor of education at the University of Pittsburgh, also favored self-effacing humor in the classroom. “If a student got something right, I would act like I was going to dance, and they were all gleefully horrified,” he says.

Barbara N. Miller, who teaches graduate classes and professional development sessions about humor in the classroom, says that patents for seemingly absurd inventions can help students learn more about different eras of the past. She points to one patent from 1869, for a device to prevent people from peeking into the next outhouse stall. “It’s a funny way to jumpstart looking into something,” Miller says. “You get an idea of what the culture was like.”

Get students in on the act

Morrison says teachers can have students demonstrate their knowledge through parody songs, riddles or funny tweets. One middle-school teacher she worked with gave each of his students a small section of a social studies chapter and asked them to write a content question using a joke, pun or riddle. The teacher then incorporated the funny questions on the unit assessment. “The kids absolutely loved taking that test,” Morrison says.

If you’re in doubt about a joke, bite your tongue. It’s better to miss a few laughs than to risk offending or insulting your students. “Even if you intend for the humor not to be hurtful, if it impacts the child in a negative way, then it’s inappropriate,” says Morrison.

Lovorn also warns teachers to steer away from any sort of R-rated innuendo, even if it appeals to older students’ sense of humor. “If you engage in that, you very well may lose the authority you’ve built up,” he says.

Humor isn’t something to stress out over—it should be light and fun! So don’t feel like you have to put on clown shoes and take pratfalls. “People think that they’re going to have to become a stand up comic, and that’s not true,” says Miller.

For Galeet Cohen, a high-school science teacher in Philadelphia, humor usually comes in the form of playful banter between her and her students. The repartee isn’t over-the-top, but it signals that her classroom is a place where students can be themselves, and where it’s okay to laugh while they learn.

“If you don’t invest in building a classroom environment that’s happy, it’s not productive,” Cohen says. “The humor is such a tiny percentage of what’s happening. But if you take that out, the rest of the class just doesn’t work anymore.”