Commit to Get Fit With Your Students

With classroom duties keeping you busy, skipping exercise can be tempting. But when you and your students work out together, everybody gets fit. 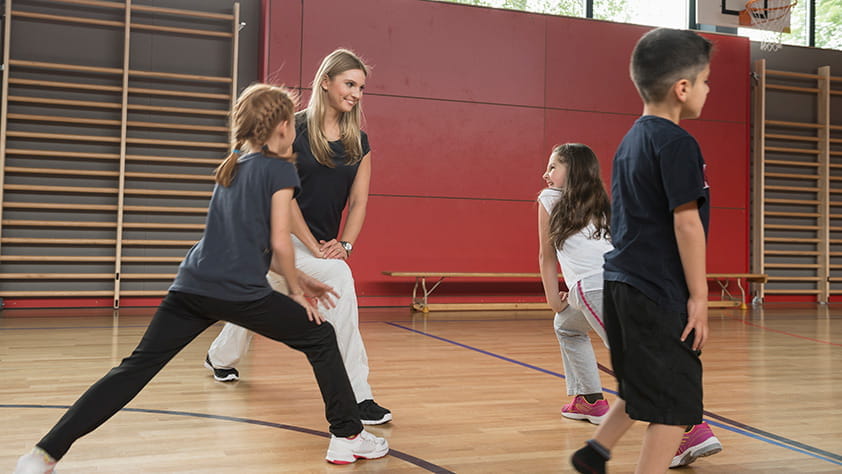 Alex Lebow wasn’t always a runner, but he became one while teaching at an alternative middle-school in St. Bernard Parish, LA. His students had no access to extracurricular activities. “We had no music, no P.E., no art. As educators, we already had a lot to do and not a lot of resources. So we found running,” he says.

That after-school club is now an educator-led organization called Youth Run NOLA and serves more than 300 students in 16 schools around New Orleans. Though the program strives to empower underserved youth through running, it has also helped dozens of educators like Lebow, president of the organization, embrace fitness along the way.

You, too, can get fit alongside your students with these tips from fellow educators.

Squeezing in an aerobics class after being on their feet all day can be a tough sell to educators, who are really good at taking care of everyone but themselves, observes Stephanie Davis, a certified teacher and certified personal trainer at ProKine Performance in St. Charles, Ill. But what many educators don’t realize is that getting fit can improve their teaching and, by extension, benefit their students as well.

“There’s never a time to turn off your teacher mode,” says Lebow. “The days that I go out and run, those are the best days. Physical exercise allows you to remove yourself, clear your head and reorganize your priorities,” he says.

Because educators are notorious for putting their students’ needs before their own, Davis believes that finding a way to get students involved in fitness might motivate educators as well.

Be a role model

Caitlyn Albano, a special education teacher in the Boston public school system, has done just that. When she began dabbling in yoga five years ago, she realized how helpful it would be for her students. She got certified to teach children’s yoga and brought her practice to the classroom with a before-school yoga class. “At the end of the day, I’m too tired to exercise, so I generally exercise in the morning before school. I believe that this opportunity to check in both physically and emotionally allows students to begin their day in a positive way—and this is also true for me!”

With fitness generally comes a healthier lifestyle that leads to weight loss. But losing weight isn’t the only—or even the biggest—perk of exercise. “When embarking on a new fitness routine, focus on the end result of how good you’ll feel by moving, breathing and releasing stress, versus weight loss, looks, inches and body fat,” says SpiroFIT trainer Stacy McCarthy, a faculty member for Miracosta College’s Kinesiology, Health and Nutrition program.

To do that, forget lofty goals and hardcore workouts that you can’t sustain and don’t enjoy. “If you devote 30 minutes to some sort of exercise that you enjoy, you’ll feel better and you will see results,” says Davis.

That’s a lesson that Lebow strives to teach through Youth Run NOLA. “We’re not trying to turn our kids into all-American track stars and we never celebrate speed. We celebrate the sense of personal accomplishment.”

Make it a priority

Even though Sean MacArdle, a high school English teacher in Colchester, Vt., coaches the Ready, Set, Run! Program for kids 4 through 12, he still struggles to make his own training a priority. His solution: Enlist a buddy. “Having a partner to motivate you is far easier than trying to do it yourself,” says MacArdle, a father of three. “When eight other things come up, you can’t push your workout to tomorrow because you’re committed to this person. I put it on the calendar and treat it like I would any other appointment.”

Educators have very little flexibility in their workday. “It’s scheduled down to the minute. We can’t come in late or leave early,” says Davis. But a regimented schedule does have its perks—you can plan your workouts. The best times to exercise: first thing in the morning or immediately after school before you get settled in at home.

For educators who wonder if the extra time and effort is worth it, Lebow reminds them of the most basic concept in teaching. When it feels too complex, all you have to do is break it down into simpler terms. “Running or walking requires nothing more than putting one foot in front of another. There’s not really much more to it than that. And the benefits are tremendous. Educators already work hard enough and sometimes they need some quick wins. When I go out running in the morning, I feel like I can do anything with the rest of my day.”

Even more rewarding: It’s a feeling his Youth Run NOLA students have embraced as well.