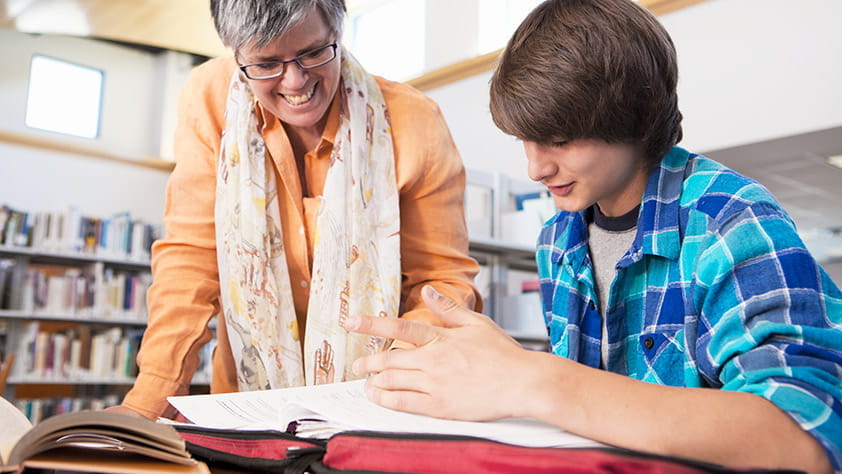 For most students, once the school day ends, homework is supposed to begin. Completing that homework, however, can be just as stressful for educators as it for the students. There are myriad reasons why, from unavailable parents and a lack of space to do homework to after-school jobs and other responsibilities, all of which makes this issue challenging for everyone.

There are things you can do to combat this trend. Here are five suggestions to help you encourage your students to complete their assignments.

1. Have students complete some homework in class

Brian Bonkowski, a teacher at Hadley Junior High in Glen Ellyn, Illinois, has been teaching for over 25 years. Bonkowski now minimizes the amount of homework that students do outside of class.

“There’s a growing number of kids who don’t have the kind of home structures that provide the support for doing schoolwork at home,” Bonkowski says. “So I require less and less work outside of the classroom. A lot of that is an equity issue, to make it fair to kids who can’t go home and can’t do schoolwork.”

Students are more likely to complete their homework if they are interested in the topic. “A large part of being a teacher is being an entertainer—you have to be funny, to tell it as a story,” Bonkowski says. “You make kids more able to join into the story themselves—what it would have been like to be a character in the story—instead of some dry, factual thing disconnected from their lives.”

For example, when teaching students about Illinois government, Bonkowski chooses a student in the class to be a suspect in a jewelry heist. They discuss everything from how the police might react to try and make an arrest, the process of getting a warrant and the rights of someone who has been accused. “It’s much more interesting and entertaining than some dull recitation of the Illinois Bill of Rights,” he says. Once engaged in this way, students may be more likely to complete additional work associated with the lesson.

3. Give students a second chance… sometimes

Don Fulmer, a social studies teacher at Lake Park High School in Roselle, Illinois, will typically give an in-class five-question quiz to hold students accountable on home reading assignments. If a student is struggling, Fulmer will pull them aside and ask why they are doing poorly. Depending on the answer, Fulmer sometimes will give another set of five questions and let the student try again. Getting a second chance can motivate a student going forward.

4. Get other adults involved

If the student is involved in an extracurricular activity, Fulmer will reach out to the contact person for that activity, like the drama teacher or football coach. “Because maybe they’ll be able to reach that kid if I can’t,” he says.

For example, describes Fulmer, when a star football player was ineligible to play because of grades, Fulmer reached out to the football coach and asked for help. As a result, the football coach went as far as escorting that student to class and sitting next to him in order to encourage him to get his grades up. “The student was mortified, but his grades improved because it had an impact on something he absolutely loved to do,” Fulmer says. “But it does take a village.”

5. Connect with a student through their interests

Even if a student isn’t involved in an extracurricular activity, reaching out and relating to their personal interests can help motivate, because it shows you care. For example, Fulmer was struggling to engage a particular student when he found out he liked electric guitars, but didn’t have one of his own.

So Fulmer made a connection between the student and the school music teacher, which eventually led to an “electric air-guitar club.” Fulmer also gave the student a book about the history of electric guitars and the life of renowned musician and electric guitar innovator Les Paul. By taking an interest in the student’s life, Fulmer’s words had much deeper resonance when he told the student: “I really need you to turn your homework in tomorrow.”

“You have to remember that this is a human business,” Fulmer says. “We aren’t making widgets on the assembly line. We are making the next leaders of the 21st Century. You’ve got to be human.”