How to De-stress for Standardized Tests

Take these small steps before, during and after testing to create a (nearly) worry-free classroom. 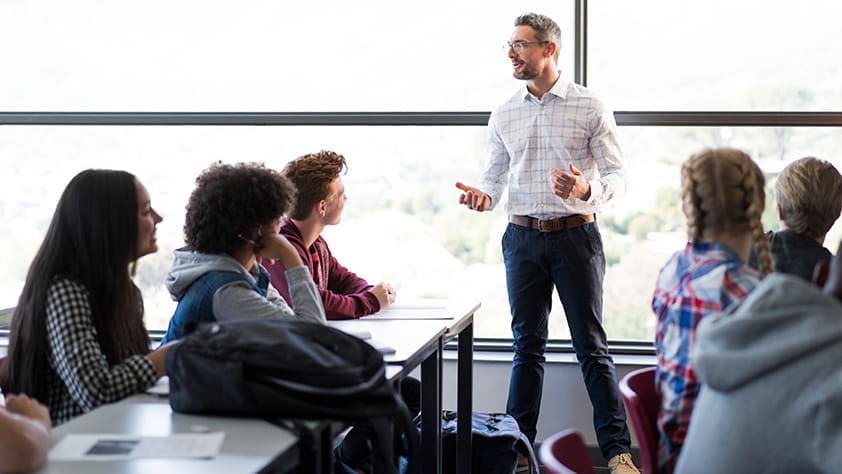 Thomas Armstrong, executive director of the American Institute for Learning and Human Development, thinks that the stress that often accompanies standardized tests can be used to create teachable moments.

“We don’t do enough in school to help kids deal with the stresses we keep pouring on them,” he says. “It’s actually far more important for our kids to learn stress management strategies for life than to do most of whatever it is we’re trying to assess on these tests. If it were me, I’d throw away the tests entirely, and just concentrate on the stress management techniques, which they’re going to need for the rest of their lives!”

Although a little test-day anxiety may be inevitable, teachers can take small steps to help keep their students calm—before, during, and after the big test.

De-stress before the test

Establish expectations. If students are struggling to catch up in reading and math, but still go into the test thinking they’ll score “Advanced,” they’re bound to be disappointed—and may freeze up when they see that the exam isn’t as easy as they’d hoped.

Jasper Fox, who teaches a high-school level earth sciences class to eighth graders in Westchester County, New York, asks his students and their families at the beginning of the year to think about what sort of score on the year-end state Regents Exam would satisfy them. “Having realistic expectations is a really important life skill,” Fox says.

Point to classroom assessments. “Sometimes the best way to [prevent stress] is to say, when you’re giving regular assessments, ‘This is very much the same type of question you’d see on a standardized test,’” say Diana Otto, who currently works at an IEP chair in Randallstown, Maryland, but has proctored standardized tests as a classroom teacher in five different states over the course of two decades. Otto isn’t a fan of official test prep, but says that teachers can prepare students by taking a moment before classroom assessments to talk about eliminating wrong choices, bubbling in answers and other basic test-taking skills.

Model calmness. If you communicate to students—either through your words or your actions—that a standardized test is a matter of life and death, their anxiety is likely to spike. Tell students that, while it’s important for them to try their best on the test, it’s only one piece of their educational puzzle.

“It’s the tone that you use to address the kids,” says Billy Krakower, an elementary teacher in Woodland Park, New Jersey. “If you seem anxious, they’ll get anxious. A lot of it is just staying calm yourself.”

Give students strategies. While no one wants to bog their teaching down with weeks of explicit test prep, suggesting a few specific actions that kids can take during the test can help them feel more confident—and less stressed. “Kids can be taught cognitive strategies that they can use during the test,” Armstrong says. “For example, if you get into difficulty, say to yourself, ‘That’s okay, I’ll go on to the next one and come back to this later,’ or, ‘I need to find the easiest part of this item to do first, and that will help me figure out the rest of the problem.’”

Be all business. You can set your students at ease by creating a business-like atmosphere where you follow all of the testing rules to the letter and read the instructions in a clear, calm voice. “The very easiest thing to do is not to treat it like we’re at court, and we’re going to find out if they’re guilty or innocent,” Otto says. “We’re taking an assessment, and we all have jobs to do. The job that I need to do is to administer this test. I’m not going to talk to you during the test like I normally do, I’m not going to be looking at my phone.”

Get physical. Just before the actual testing period begins, consider leading students through some light stretching or physical exercises to help loosen them up and release tension. Many of Krakower’s special education students are able to take short breaks as one of their testing accommodations, and some of his colleagues have students move along to videos from GoNoodle before a big test. “It’s a great tool to de-stress the room and give kids a brain break,” he says.

Recover after the test

Share scores privately. Fox used to let his students know how they did on the Regents Exam by having them come up to his desk while the other kids were in the room. “The kids would say, ‘What did you get? What did you get?’” he recalls. “It wasn’t as private as it could have been.” Now, Fox shares the scores using a text-messaging app, allowing kids to find out how they did without the added pressure of the spotlight.

Let students play! After hours cooped up in a quiet room, students deserve a chance to blow off some steam. Armstrong suggests taking the class for a nature walk, letting them listen to some favorite music or even just having them talk about the test with a friend.

Otto asks students how they felt about the test and then lets them play games until the bell rings. “Kids might be quiet during the actual time of the test, but it’s really hard for them to sit and be silent when there’s no good reason to,” she says. “As long as you have that test site secure, it’s okay to make it an enjoyable experience.”