How to Establish Strong Parent-Teacher Communication 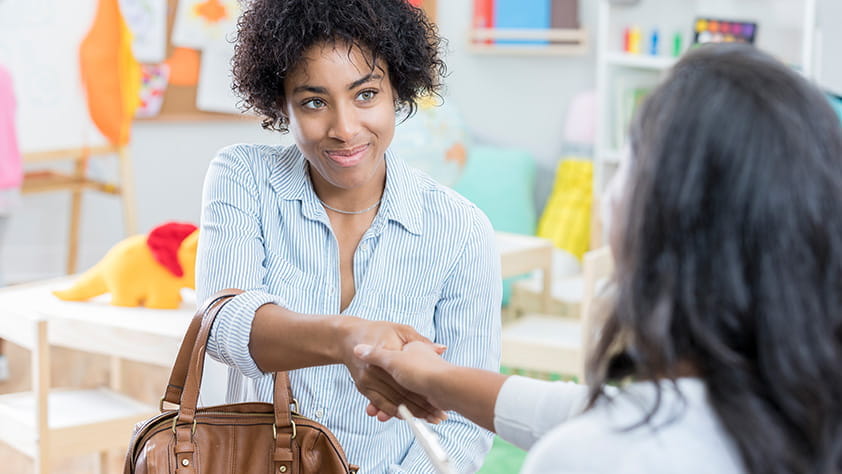 It doesn’t matter the age group or environment, every educator needs to do one important thing when it comes to parents, says Nathan Barber, a high school principal in Houston who writes the blog, “The Next Generation of Educational Leadership.”

“At the beginning of the year, I tell all of my educators to make a positive deposit in the bank account,” Barber says. “So if you have to make a withdrawal you aren’t in a deficit.”

That means meeting parents as quickly as possible and telling them that you look forward to getting to know their child. “The sooner the better,” Barber says. “Within the first week or two when there’s no baggage yet and everyone is starting with a clean slate. It quickly establishes a relationship built on trust and makes the parents interested in the classroom.”

Much of that parent-teacher partnership revolves around effective communication techniques. Here are 10 ways for educators to develop positive relationships with parents and turn them into strong partners and allies.

1. Share positive news. While it’s important to be proactive with all communication, be sure it’s not always negative. Barber suggests sending handwritten notes, emails or calling (until you reach a parent) to tell a parent when their child has had a great week. “I’ve never heard a parent complain about getting too many positive notes about their kids,” Barber says. The key is to send a message that isn’t too generic, to demonstrate that you really know the specific student. “It’s a huge way to build trust and engagement,” says Barber, which can significantly help if you have to make a difficult phone call later on.

2. Communicate in various formats. Some teachers send out a weekly wrap-up email, others upload lessons and documents via a class website. “Approach it as any business would,” says Brian Stewart, a former Dublin, Ohio, high school social studies teacher who is now the president of BWS Education Consulting Inc., a tutoring firm based in Columbus, Ohio. “Rather than passively answering the phone, if you have a presence on the web, parents can see what you are doing in the classroom rather than just hearing complaints through their children.”

3. Leave the abbreviations at home. “Education is full of them,” says Alison Whiteley, a special education teacher at Slater Elementary School in Denver, Colo. “You are required to give parents the technical stuff, but at the end of the day, parents really want to know what this means for their kids.” She suggests using pictures to help illustrate important topics during parent-teacher discussions.

4. Be proactive and prompt. We live in a 24/7 world and parents now expect teachers to communicate more quickly than ever. It is vital that if there is an issue with a student’s performance, to let the parent know at the first sign of trouble rather than allow the issue to fester and become a major problem. “Teachers should be available either by email or through a website to help parents stay on top of a lot of things,” says Angel Zobel-Rodriguez, a mother in San Fernando, Calif., who has a 23-year-old son and a 13-year-old eighth-grade daughter. “Back when my son was in school it wasn’t unheard of for a teacher to not have email. But these days I can’t imagine it.”

5. Tell parents your preferred method of communication. “I love ‘Back-to-School night,’ where it’s open-ended communication and not just a dog and pony show,” Zobel-Rodriguez says. “I like it when the teacher discusses their expectations and suggests how to communicate with them. That’s when I know if I’ll have a good experience this year or not.”

6. Have a demonstration night to get parents involved. This can range from having students in lower grades spell words, draw or write sentences to having students create something on a 3D-printer.” Anything that is not a worksheet, that a student produced and is uniquely theirs tends to draw a lot of parents and generate a lot of buzz,” Barber says.

7. Tap into parental expertise. Encourage parents to be guest speakers, contest judges and field trip chaperones. “If you value their expertise, they will value yours,” Stewart says.

8. Ask one question at the beginning of the year. During their first in-person meeting, Stewart would always ask his parents: “What do you think I should know about your child?” “I was amazed at their (written) answers,” says Stewart, who used the comments to help with future parent discussions.

9. Work around a parent’s schedule. Find out a parent’s preferred method of communication and use that channel and time of day. If you know the parents are working during the day, call them later in the evening, Stewart suggests, “so it’s not phone tag back and forth.” Or use a study hall or a planning period to do a quick conference call.

10. Offer to make a house call. This is a bit extreme, but effective method, Zobel-Rodriguez says. “There was a biology teacher who told us, ‘I want all of your children to all succeed, and I will stay after and before school to make this happen. I will even come to your house for dinner if I have to,’” she says. “There was a nervous giggle from all of us, but what an awesome ice breaker. I knew he meant it. Those kids probably did better that year than any other year because they didn’t want their teacher to show up for dinner.”