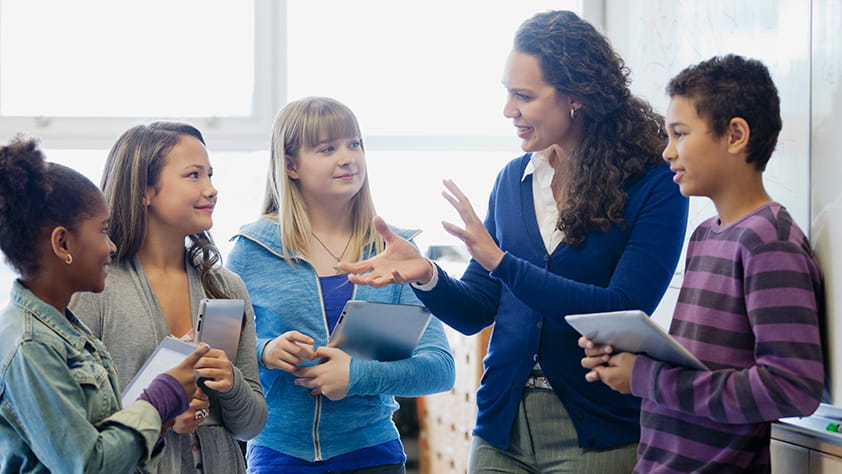 Before Don Fulmer began his teaching career at Lake Park High School in Roselle, Ill., he worked as a railroad conductor, truck driver and mailman. It prepared Fulmer to be flexible and ready whatever comes next.

That’s why Fulmer starts the first day of school by giving a five minute overview of constitution basics. He reads the First and Fourth Amendments and gives a few additional details about the U.S. Constitution and the Illinois State Constitution.

Then he rolls out the butcher block paper and asks his students to collaboratively write their own classroom constitution. The document serves a two-fold purpose: to help students relate, on a personal level, to the problems that founding fathers faced, and to create a mutual set of guidelines that students will actually adhere to throughout the year. More importantly, it helps to create a balance between classroom guidelines and allowing students to be creative.

“The students want to respect each other, so I use that to my advantage,” says Fulmer, who has taught social studies for the past 15 years. “It’s amazing what they come up with without much prompting. The classroom constitution becomes one of the best tools I’ve got.”

Here are five more ways to encourage respect in your classroom.

1. Focus on the “we” in the classroom

The goal, Fulmer says, is to create a balanced classroom where students adhere to guidelines, but the rules aren’t so heavy handed that it stifles classroom creativity with an oppressive environment.

“It’s your classroom and you are entering into a partnership with your students,” Fulmer says. “That respect should be mutual. Clear guidelines should be established, but with a dialogue about expectations.”

One of the keys for establishing classroom respect is frequently using the word “we” instead of “I,” Fulmer says, to emphasize that partnership.

2. Create peer groups based on students’ interests to improve collaboration

In the “good ‘ole days,” Fulmer jokes about having told students to sit alphabetically in his classroom, from A to Z. Now he does high-level planning seating charts that are “very strategic.”

On the first day of class, Fulmer asks his students to fill out a questionnaire about themselves. It’s filled with questions to help Fulmer get to know his students better, from their favorite celebrities and sports teams to favorite types of animals and knowledge of current events. Then, based on this information, he takes a day or two to organize a seat chart, and puts students in peer groups of four based on their common interests from basketball to reading strengths. “Immediately it is disarming for them,” Fulmer says. “They realize it’s okay to talk about these things.”

Fulmer also uses this knowledge to engage with students over common interests, which ultimately helps to improve test scores and collaboration while nurturing mutual respect, he says.

“It’s about getting to know your customers,” Fulmer says. “And I call them customers, because I have an open and close time like a store. If the teacher knows their craft, the students will pick up on it. And If I’m a car salesman trying to sell you a lemon, the kids are going to pick up on that, too.”

3. Know your kids; get involved

Debra Willems, a first grade teacher at Washington Elementary in Wheaton, Ill., says she attends multiple events outside of the classroom from dance recitals and baseball games to birthday parties to get to know her students and to build trust. She also hosts a classroom picnic every July to get her former students together one last time and to help them prepare for the coming school year. “When they see me at events outside of school, they see that I respect them,” she says. “I’m constantly giving them high-fives and emphasizing how important they are.”

For kindergarten teacher Jennifer Bond Stuart, who works in Dunnellon, Fla., that means watching her students on the playground. “It reminds you that they are just little kids with individual personalities,” Stuart says. “You’ll learn about who the kids are by watching them play. Just let them come up and talk to you.”

Instead of eating with fellow teachers, Willems spends most days eating at her classroom desk so current and former students can visit and ask her questions. “I want my door to be open for them to come in and they can’t go into the staff center,” says Willems, who has a few students visit her each week.

5. Be flexible and adapt

Willems jokes that she is “pretty laid back” and very much a “momma bear.” When she found out of one of her first graders was sleeping in a one-bedroom apartment living room with five other siblings, after his mother just had a baby, Willems made adjustments in her classroom. “I would let him take naps, because at times he’d come to school exhausted,” she says. She also realized this child also needed “sensory breaks” so he could refocus. Willems arranged to buzz the school nurse, who would then take the little boy on a 5-minute walk inside the school to help him recharge.

“Usually the extreme kids have a reason they are extreme,” Bond says. “Once you figure out that reason, it usually makes it easier for the teacher and the student.”

For example, Bond says she had a student who had come from a foster home and had been abused before she was adopted. The child was behaviorally two to three years behind other students. “As a teacher you have to take that into account, where is this child individually,” she says. “And that the child might not be capable of performing at the average.”